I first heard of Australian barbecue in the 1980s, when actor Paul Hogan (of Crocodile Dundee fame) promised me through the TV that he’d “Put an extra shrimp on the barbie” for me, if only I visited the Land Down Under. I figured out that Hogan was talking about a grill and not the iconic doll, but any further conclusions remained elusive. 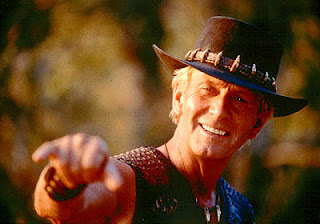 Decades later, the “Barbie Babes,” a team of three native Australians competing on the Food Network’s The Great Food Truck Race, raised my hopes for finally getting some answers. That was before their team was eliminated during the show’s second episode—far too soon to share their spin on barbecue with America. Still hungry, I reached out to Awia Markey, an Aussie who’s writing a book on soul food. After polling a cross-section of her friends, Markey gave me this description: “The most basic form of BBQ is known over here as the ‘Sausage Sizzle’…always with [grilled] onion, and then the sausages and onion are put between two slices of (usually) white bread.” Other meats can be the choice entrée, including lamb chops and, of course, shrimp.

I’m so relieved that Crocodile Dundee didn’t lie to me in my youth.

Typical sides at an Aussie barbecue include a green salad, potato salad, coleslaw, and beets. Though the Australian version doesn’t meet the “low and slow” standard necessitated by purists, it’s an interesting example of how a culinary art is practiced elsewhere on Planet Barbecue.